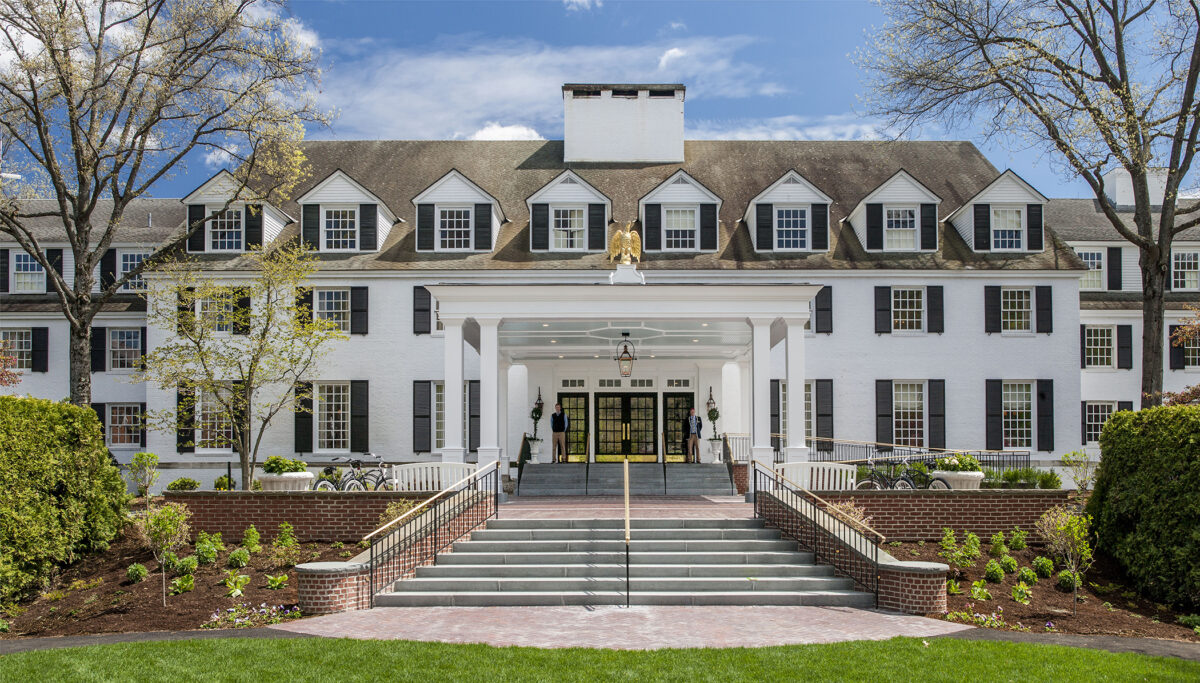 On a blue-sky summer afternoon, we drove through the quaint town, past the covered bridge and approached the long driveway of the historic Woodstock Inn. A surreal feeling set in as we parked on the red brick landing near the white porch columns, above which was a giant golden eagle statue.

We were transported to a bygone era as we entered the lobby like we were co-stars on the big screen, expecting Cary Grant, Humphrey Bogart and Katharine Hepburn to sip cocktails in one of the seating areas. comfortable. Victorian furnishings, decor, and Vermont pastoral oil paintings complete the scene.

Indeed, the Woodstock Inn’s charms aren’t captured by its 5-star hotel rating. It’s a place with 229 years of historical significance and the blessings of a benefactor in Laurance Rockefeller, grandson of John Rockefeller of Standard Oil, the richest American in history (although now tied or slightly overtaken by Elon Musk).

Why did Laurance Rockefeller, a man of unlimited means, become interested in this quirky town and his local inn?

As is often the case, out of love.

It has been a remarkable year in the New England town of Woodstock. During the snowy winter, the country’s first towline would be installed, ushering in an era of modern industrial-powered skiing.

Then, in August, the town’s local heiress, Mary French Billings, would marry one of the world’s most eligible bachelors: Laurance Rockefeller.

With the means to marry anywhere in the world, Mary and Laurence chose the Billings’ family farm and third-generation estate for the affair. This would seal the Rockefeller connection to Woodstock, which today is located on Route 4 between Ivy League Dartmouth College in Hanover, New Hampshire to the east, and the famous Killington ski area to the west.

A house for an environmentalist

In 1951, after Mary’s mother died, the Rockefellers renovated the Billings’ mansion and made Woodstock their country home. They would retreat here with family and close friends to immerse themselves in nature along the banks of the Ottauquechee River, hike Mount Tom, observe the practices of their working farm, enjoy their lush gardens and skiing in winter.

Rockefeller would become the national conservation leader, advising every president from Eisenhower until his death. His hands-on approach combined land preservation with a focus on public access so the masses could enjoy and benefit from the wonders of nature.

He is quoted by the National Parks Service as saying, “Concern for the environment and access to parks is not frivolous or peripheral; on the contrary, it is central to the well-being of people – body, mind and spirit.

Rockefeller invested his time in numerous projects to establish public parks in Wyoming, California, the Virgin Islands, Vermont, Maine, Hawaii, and New York. It has also invested its private capital in creating a new type of hospitality category called “eco-tourism”, which is aptly named Rock Resorts.

The caretaker of the Woodstock Inn, located just a few blocks from his own home, approached Rockefeller in 1967 about investing in the tired property. It was determined that the historical treasures of the inn should be preserved, but the structure of the hotel should be completely rebuilt to restore it to its greatness. Rockefeller took ownership of the hotel in its RockResorts portfolio and the following year opened a new, significantly improved facility while retaining the style and character of the original property. He even had the city’s power lines placed underground in a beautification effort.

Since then, the Inn and surrounding area has seen steady capital improvements, both to Inn ownership and through acquisition to include the addition of a country club for golf, a ski resort , a tennis and fitness center, a full on-site spa, and a bridal suite. , an organic garden and most recently a complete interior refurbishment of all rooms in 2018. While we were there I observed seemingly fresh white exterior walls being repainted by a team to remain perfectly white.

Discover Woodstock and the Inn

While many resorts of this caliber exist behind secure gates isolated from the surrounding community, the town of Woodstock and the Inn seem to blend effortlessly with no discernible line of demarcation, as if they are all part of the same scenic experience. .

We would take walks around the hostel grounds and meet in town, stopping for a photo on the covered bridge, admiring the Victorian homes in the residential neighborhoods, exploring different spots along the river and browsing the shops at looking for gifts, books and delicious treats.

Despite being a large hotel, the Inn is laid-back Vermont. It was very welcoming to our children, who made full use of the old-fashioned living room playroom, explored the gift shop, and were treated to afternoon cookies in the lobby. Our dog, Sophie, was also treated to cookies at reception and a dog bed and bowl in our room.

The concierge was very happy to help us choose from the myriad of activities within the resorts property and in the surrounding area. My son and I enjoyed an epic round of golf on the famous course designed by Robert Trent Jones, Sr..

After various morning excursions, we spent our afternoons on lounge chairs by the heated saltwater pool soaking up the Vermont sun and working up an appetite for dinner. We also spent time playing ball or walking Sophie on the inn’s back lawn and roasting s’mores in the evenings at the fire pit.

Frequently we would see fly-fishing lessons going on on the lawn near the activity center, which also houses a fleet of cruiser and mountain bikes ready to be family-friendly to explore the streets and trails on two wheels. In the winter, it’s all about the Inn’s owned and operated ski resort, which is less than 10 minutes’ drive away.

For hotel guests, admission to the nearby Billings Farm Museum is free, and I highly recommend it. There, a theater plays an Oscar-nominated short documentary, “A Place on the Land”, which gives a fascinating introduction to the Billings Farm and Museum and the adjoining Marsh-Billings-Rockefeller National Historical Park.

The film explores the 150-year history of the farm through the stewardship of George Perkins Marsh, who built the estate, Frederick Billings, who would pass the estate down through three generations of Billings women, to finally Mary and Laurance Rockefeller. Rather than pass it on to their children, the Rockefellers donated both the mansion and the adjoining farmhouse to the community upon Mary’s death.

After watching the movie, we toured the farmland and indoor displays of all the old farm equipment, many of which were innovated on site, and then crossed the road to visit Billings Mansion.

As you walk through the house, you see all of their original artwork, furniture, and even periodicals on the coffee tables as if it were a space frozen in time. From the top floor windows, you can look out over the farmhouse, gardens, mountains, inn, and town of Woodstock and imagine escaping the hectic New York lifestyle and how this rural oasis would recharge their family.

As Rockefeller said, “Amidst the complexities of modern life, with all its pressures, the spirit of man needs to be refreshed by communing with unspoiled nature. In such an environment – ​​however occasional our visits – we can achieve the kind of physical and spiritual renewal that comes only from the wonders of the natural world.

If you are going to

To arrive: You will have to arrive by car. Woodstock is near the intersection of Interstates 91 and 93 near the New Hampshire border. Burlington Airport is about a 90-minute drive, and Hartford and Boston airports are less than two and a half hours away.

Having dinner: We ate most of our meals at the lobby restaurant, The Red Rooster, which offers a decadent morning buffet and an inventive Vermont-themed dinner menu. You can dine indoors or on the veranda overlooking the back lawn. For advice on the many good restaurants in town, consult the concierge. They shared that a particularly popular reservation is the restaurant inside the Simon Pearce Glass Factory store where you can also watch the glass blowing.

Do: Each season a different menu of active outdoor offerings is available. Hiking, walking, golfing, fishing and biking are great options before the freezing winter arrives. Skiing is the main attraction of winter.

Take note: With so many fun, active things to do, it’s easy to get into the go-getter mindset. To truly experience the charms of the Woodstock Inn, set off for an afternoon or an entire day with no agenda. Read a book or write a postcard in the lobby with a cup of coffee, take a leisurely stroll through the park and explore the city. Play a game of pool in the games room. Relax on a lounge chair and have a swim. Take advantage of the fitness center’s sauna and whirlpool. Try to minimize electronic diversion. Rejuvenate your spirit as Laurance and Mary Rockefeller intended!

The author was a guest of the Woodstock Inn and Resort