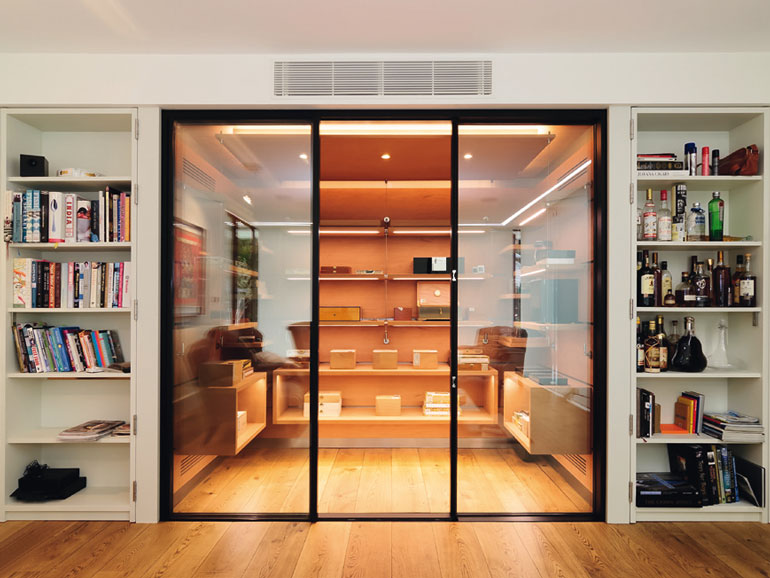 MADE IN ITALY | Cigar journal

A cold morning; Milan Linate Airport. Massimo de Munari comes to pick me up at the door. We get into his car and drive at full speed through central Milan to inspect the regional Casa del Habano. Massimo is not a tourist guide but, together with his brother, he owns a cabinet-making workshop. His company, DeArt artfully furnishes rooms around the world that are unprecedented. We are interested in DeArt, which is established in the metropolitan area of ​​Milan, as owners Massimo and Alberto de Munari specialize in building cigar humidors. Among other things, DeArt designed the Casa del Habano in Milan. The objects are marketed under the Cigars Time brand. And yacht enthusiasts will find experts in boat interior fittings in the two brothers. They are responsible for the cabins of various luxury yachts. And to pique your interest even more, the range of clients of the Italian family business ranges from individuals to restaurateurs and traders to heads of state. The brothers’ work can be found in London, Saudi Arabia, Singapore and China.

A little gesamtkunstwerk by the humidifier makers of Italy: the walk-in humidor in The Wellesley in London

FROM LOUIS-SEIZE TO THE BEDROOM
Alberto and Massimo’s father, Giovanni de Munari, founded the company in 1962 in Calvenzano. “At that time, many craft businesses settled there, and today there are many master businesses,” Massimo explains to me. It is mainly craftsmen cabinetmakers and inlayers who set up their workshops there. Like his sons, Giovanni de Munari also sought a specialized field. He made barometers, then focused on building grandfather clocks, pendulum clocks, and wall clocks. In addition, DeArt specializes in the manufacture of period furniture. Ornate objects can be reproduced or made. Louis-Seize, classicism, art deco, anything is possible. No design vocabulary is unknown to the Munaris. Giancarlo Savinelli’s passion for cigars and their storage options was awakened in the late 1980s. “He asked us to make humidors; we delivered boxes with various inlay designs. At the RTDA, now the IPCPR, they were a hit, ”recalls Massimo de Munari. Meanwhile, the company has a team of experts exclusively specialized in the construction and technology of humidifiers. The boxes then became display cases, then wall units and, in the meantime, cigar humidors. When the sons took over the business, they invested in high-tech machinery; from a technological point of view, DeArt is at the cutting edge of technology. On site in the factory, I am able to follow each step and observe how Cigars Time humidifiers are built. We begin our visit to the cedar wood storage facility. All cellars, regardless of size, are lined with untreated Spanish cedar. DeArt’s storage facility is like a treasure chamber. The inventory here is not only enough to equip many humidifiers, but also can ensure that the color scheme of the respective objects is harmonious. A good example is the contract for the cigar humidor for the 225th anniversary of Hunters & Frankau. DeArt made 225 of them and customer Jemma Freeman was delighted with the consistency of color of the cedar wood inside the cabinet. “I had been very impressed with the work I had seen around London where DeArt had installed many humidifiers. Their standards and attention to detail were exemplary. For example, on our project, Massimo personally selected all of the Spanish cedar that was used. We left it untreated because it gave the cabinets a raw, dusty and natural look, which we think is timeless, ”says the British cigar expert. Our visit continues to the cutting machines. The machines, almost robots, “read” the designs of the designers and deliver what the designers have imagined after consulting with customers.

Together with his brother Alberto, Massimo de Munari (pictured) runs the craft cabinetmaking business near Milan

If at any time a part needs to be replaced, it can be delivered at any time without problem; everything is recorded and stored. This is also where the individual pieces of the huge Baroque theater were produced – large projects like this can also be done by DeArt. We move on to the paint shop, which is the next most important step in the production chain. This is where the individual pieces are varnished, painted or enamelled. Then the “pieces of the puzzle” are put together. Just a few days ago in the factory hall there was a noble cigar humidor with an integrated cooling system for wine, built faithfully to the original. Now packaged, the humidifier is waiting to be shipped to the customer in China. Everything DeArt builds is assembled and tested in the factory before being transported to the customer. A fun idea: in Calvenzano there were full cigar shops, lounges and cooling systems, which now beautify the Corinthia Hotel, Harry’s Bar, Bulgari Hotel or Wellesley in London, among others. “Eddie and Edward Sahakian chose DeArt to design, build and install our three double cabinet humidors for the Edward Sahakian cigar store at Bulgari Hotel London in 2012. We were one of the first locations in London to work with Massimo and DeArt and we are very happy to see their work appear in many new locations, not only in London but also around the world, ”says Mike Choi, store manager of Sahakian enthusiastically.

DeArt designed the wall cabinets for the perfect cigar storage at the Arts Club in Mayfair, London

PERFECT ROOM TEMPERATURE
Choi is also satisfied with the humidification system developed by Massimo: “After nearly five years of service, I can, hand on heart, say that I have never had a problem with the humidifiers or the humidification system. – real work horses! The de Munari have worked meticulously on the humidification system in their cellars for a long time. While we smoke a cigar in the office, Massimo de Munari explains the systems to me and shows me the latest cigar humidor test model. A monobloc, called “Total clima Evo”, guarantees a perfect temperature and a suitable humidity level. “All areas of the cellar have the perfect temperature thanks to an integrated circulation, humidification and dehumidification system,” explains Massimo. Should Evo be faulty, the entire block can be removed with little effort and quickly repaired. The values ​​can not only be read but also checked via an app on a smartphone. All humidifiers and chambers built by DeArt have “sandwich walls”. On the outside is the wood chosen by the customer, behind there is a solid wood core and a layer of insulation. This is then covered inside, inside the cellar, with Spanish cedar. All glass inside is thermal safety glass. It is sealed all around with silicone and each door has a triple lock. Restaurateur Dario Nembrini, who had de Munaris built a cigar humidor, emphasizes: “There is no doubt about the professionalism of DeArt. What is remarkable is the high quality of all the materials they use in the manufacture and the continuous research they do to ensure the best temperature for cigars. Currently, DeArt is building a salon and cellar at the Trinity Hotel in London; the Casa del Habano in Kuwait; and display cases and cigar boxes at the Four Seasons Hotel in Florence. And naturally, always following the credo of the de Munaris: “We have the maximum flexibility for exteriors and meet all the customer’s wishes. Inside, the cigar has priority; the technology and the lining are completely geared towards this, ”explains Massimo.

For more information on completed and ongoing projects and humidifiers, please visit deart.it or cigarstime.co.uk.