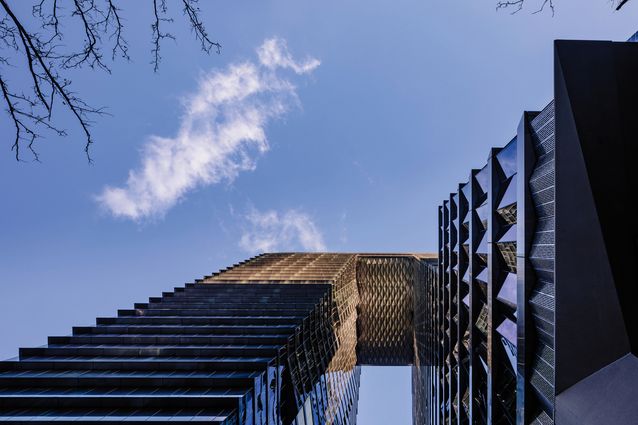 The city of Melbourne is slowly coming back to life after months of confinement, intermittently. As I walk through the streets of the CBD, I see people around, a tenuous return to the streets.

Walking west along Collins Street, you pass some of Melbourne’s best 19th century merchant buildings – the Block Arcade (1893), the Old Melbourne Stock Exchange (1891), the Old ES&A “Gothic” Bank (1887) and, across the intersection of Collins and Queen Streets, the former National Mutual Life Association building (1893). These Gothic and classical buildings are remnants of “Wonderful Melbourne” and the land boom that fueled it. They are street buildings with a rich set of windows, doors and ornaments proudly exhibiting the commerce of the time.

You have to walk down William Street to get a feel for the next big boom and twentieth century trade legacy: Yuncken Freeman’s AMP Square (1969), Eagle House (1971) and, with Skidmore Owings and Merrill (SOM), Maison BHP (1972). By this time, rather than building a street edge, designers had started using plazas to interact with the street, and a new sense of space was being created, with the commercial force expressed primarily through height.

The nineteenth century of Collins Street and the twentieth century of William Street meet at Collins Arch, Woods Bagot and Shop Architects’ new tower, plaza and “pants” park which redeveloped an entire city block, relocating potentially the city’s center of gravity to where it once was. Bounded to the south by Flinders Lane and the Market Street anomaly to the east, it is the site of another former National Mutual building, built in 1965 and designed by local company Godfrey, Spowers, Hughes, Mewton and Lobb, with plaza landscaping by Grace Fraser. Before that, it was the site of Melbourne’s first official fruit and vegetable market, the Western Market.

The old National Mutual building was a slab clad in marble set back from the street, giving it the kind of presence that many buildings in the city don’t appreciate. The resulting Modernist square was one of Melbourne’s most successful, with bustling lunch crowds sitting on its bluestone edges enjoying the sunshine. However, a draft heritage list was vetoed by former Planning Minister Matthew Guy, resulting in the building being demolished in 2015. Its loss, along with the square, was a disgrace for the architecture of the city and raised the bar for what should replace it.

New owner Cbus launched a competitive process to get major international companies to partner with locals, a method similar to SOM’s entry into Melbourne in the 1970s. In fact, SOM is almost back – l one of the competing teams was Fender Katsalidis with SOM. Others included Hassell working with Bjarke Ingles Group (BIG) and Bates Smart with Snøhetta. The winner was Woods Bagot with Shop Architects.

Shop is an impressive outfit, aggressively engaging with building systems, especially facades, and taking risks on board in a rare way. Speaking in 2018 in Melbourne, after finally getting a planning permission for the project – which is Shop’s first in Australia – Shop co-founder Bill Sharples spoke of the stark differences between urban planning in the United States and New York, where the company is based. . He found the discretionary nature of the Victorian planning system surprising; Shop was more used to the fixed rules of the famous New York system, where air rights can be traded and volumes consolidated. The design negotiates well the constraints associated with the eclipse of the banks of the Yarra, the tower is leaning forward above the withdrawal on Collins Street in a reversal of the normal development withdrawal pattern.

By browsing the site, I was able to navigate in all the public spaces; essentially, a simple system of north-south and east-west bluestone alleys connects the four streets together. The space between the towers forms a connection with Customs House (now the Immigration Museum), which once overlooked a saltwater basin that was Melbourne’s original disembarkation point for boat arrivals. This connection is better seen from the sky than from the banks of the Yarra and undoubtedly contributes to forging the image of the building as a place of global exchange.

While a podium with two laps might have been a standard response to the brief, Collins Arch effectively submerges his podium so that his built ground plane is level with Collins Street. The National Mutual building did the same, but the new project treats side streets much better, especially on the east side. Here, a new amphitheater serves as a staircase and ramp to access the main level. The wooden blocks articulate and form a screen, forming a pleasant space that was well used even in a somewhat unoccupied area of ​​the city. The space descends to the edge of Market Street, where a large colonnade follows the levels of the land and creates a covered area overlooking the new park. The columns of this colonnade are shaped to be both massive and precise, landing on the mostly glass tower.

Building on the legacy of the previous plaza, the project sought to provide an open outdoor space – augmented by the city of Melbourne converting part of Market Street into a park, which merges and merges with the open space of the building. In addition to the open space on the ground floor, functions include retail, commercial offices in the west tower, a hotel in part of the east tower and residential units spanning the bridge and in the west tower.

Place de la Mutuelle Nationale was privately owned but used by the public. Collins Arch opened to the public, this redefined islet being partly public and generally accessible to the public. As a tour, it seeks to reinvent the type and build on other international formal experiments, in particular and obviously the China Central Television Headquarters in Beijing by the OMA. While the OMA building bends a tower into a loop, Collins Arch is more of a bridge between the towers. It reads, however, as a continuous part of the key view of the river. His branding as Collins Arch came after conception – and the meaning of an arch is there, if only in part.

The eight-storey bridge adds some of the wasted floor space of a relatively open ground plan. Inside the bridge is a combination of residential facilities, including a lower level swimming pool, five levels of apartments, and then a surprise: a three-level courtyard with a hanging garden atop. This is a very engaging (if not public) space – exclusively for residents, but one that goes a long way in creating a small park for a large number of dwellings. Naturally, the garden offers great views, but its quality comes from the balconies planted on the sides and an open top. A single tree stands quietly, happily, in the middle of the garden, shedding its leaves up the street.

Collins Arch is an impressive piece of shaping – not only the overall mass spanning itself, but the wavy glass facades that give the project a changing skin. The project reveals itself in different ways when viewed from the surrounding streets – glimpses of the sweep towers come in and out of view, with a sense of the arc especially present when looking at the bridge from below. Up close, the building is comfortably installed in the street, going back and forth without leaving it; the last building to sit on the corner of Collins and William seems to have returned to the street.

Cover Genius secures $ 100 million in Series C round with

ATEME: signs a MEA distribution agreement with IT Hospitality

Legionnaire’s disease contracted by a tourist at the Hotel Keys: Suit