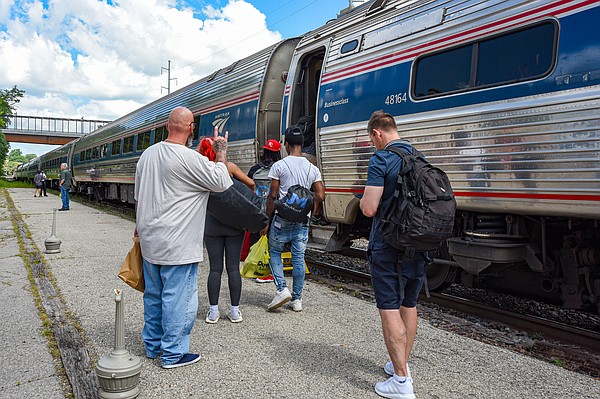 On the day they celebrated the restoration of two daily round trips across the state, Amtrak officials also announced plans to make improvements to the area where passengers are picked up in Jefferson City. .

With funding approved by the Missouri General Assembly and signed by Governor Mike Parson, full service on Amtrak Missouri River Runner trains resumed Monday; it will continue until the end of the year.

The westbound train arrived just after 11 a.m., where passengers were greeted by local and state officials with refreshments; this was something done at other stops along the train’s route. Amtrak officials were also on the train, and spokesman Marc Magliari said they thank lawmakers for their support.

Although there is only one daily train across the states for the first five months of the year, passenger numbers for the River Runner are showing rising numbers from 2021-22.

According to Missouri Department of Transportation officials, ridership for January-May 2022 was 34,074, compared to 24,992 for the same period in 2021.

The number of passengers boarding at Jefferson City also increased in the first five months of the year, with 4,034 people boarding the trains this year, compared to 3,367 last year during this period.

People getting off the train in Jefferson City also increased, with 3,367 arriving this year and 3,133 last year.

“Now we can talk about building our network and maintaining what we have as a base for growth,” Magliari said.

Already, the Legislature and Governor Parson had approved $14,279,608 to be allocated for renovations to the Union Hotel, built in 1855 and part of the Jefferson Landing State Historic Site, which had the train station waiting room Amtrak through 2019. A structural inspection of the building, which is owned by the Missouri Office of Administration and operated in cooperation with the state Department of Natural Resources and Jefferson City, determined there were significant issues with the structure, and it was closed.

On Monday, Magliari announced that Amtrak would fund the platform upgrade at the Jefferson City stop.

“We need a better ADA-compliant platform, and that’s not what we have here now,” Magliari said. “Things will work out.”

Magliari said the work would cost several million dollars and the ground would be broken next year. Office of Administration officials estimated that the Union Hotel project could take a year to design with a construction schedule of two to three years.

“As the Union Hotel is repaired, we will also work on upgrading the platform,” Magliari said.

A temporary Amtrak station in the Jefferson Landing State parking lot will remain in service until the hotel renovation is complete.

Amtrak operates the service under contract with MoDOT. Federal law requires states to pay a portion of the cost of certain Amtrak trains. All state funding comes from its general revenue fund.

After Parson signed the legislation, MoDOT received $13.25 million for two daily round trips. Last year MoDOT received $10.85 million. It financed two return trains from July to the end of December 2021 and a daily return trip from January to June this year.

Before the start of the legislative session, MoDOT officials said lawmakers told them they shouldn’t be in arrears with the service and that returning to a train would allow them to balance the budget.

Local state officials Dave Griffith and Rudy Veit said they support the funds to return the second train to service. Republicans said voters told them how vital the second train was to them.

“Some of them are starting to use the train here to make long trips to other parts of the United States,” Veit said. “With the high price of gasoline, we are becoming more and more dependent on other modes of transport, especially for those who cannot afford gasoline or a car to get where they must surrender. I have people who have told me that they take the train just to see or take care of their grandchildren in Saint-Louis.

“We want to meet the needs of those who don’t have the money to travel to other parts of the state and having two trains gives them more options,” Griffith said.

The two men agreed that two interstate trains should be available 365 days a year and not just during the last six months of the year as happened last year and this year.

Veit added: “I think once people start using it twice a day again, and it’s proven to be reliable and convenient, I think the support will be there because as long as prices gasoline will increase, we will see more people using public transit systems.”

A Missouri River Runner pre-pandemic study found that the service generates more than $200 million in annual economic impact in Missouri. It also supports more than 1,250 jobs in communities across the state.

Diane Gillespie, executive director of the Jefferson City Convention and Visitors Bureau, said they are working to better track the financial impact of Amtrak visitors.

“We saw that we missed that aspect, especially in tracking our round numbers at Missouri State Prison,” Gillespie said. “With the second train, people can come here in the morning, spend time touring Jefferson City, and get home on the evening train.”

Gillespie noted that many St. Louis and Kansas City lawmakers will take the train to Jefferson City and rent a car for a week to get around town during the session of the Legislative Assembly.

Among those boarding the morning train heading west to Jefferson City was Charlie Nilon of Columbia. He thanked lawmakers for donating the funds for the second train.

“My wife works at Lincoln University, and there were times when I was driving, picking up my wife from work, and then we were taking the train to St. Louis to see our daughter,” Nilon said. “Not having the second train made it less convenient for us.”

Magliari said, “People from all over the state came to MoDOT and said they wanted to talk about service. There are people in Hannibal who want to connect to Quincy and maybe St. Louis. We have people in St. Joseph who want to consider round trip service to Kansas City and possibly as far as Omaha.

The westbound Amtrak Missouri River Runner train arrived at the Jefferson City depot on Monday morning, July 18, 2022, at 11:06 a.m., where Amtrak officials were greeted by local elected officials, representatives from the Jefferson City Convention and Visitors Bureau and Chamber of Commerce. Monday began the renewed schedule of two eastbound and two westbound trains each day instead of one each. (Photo by Julie Smith/News Tribune)

Charlie Nilon, left, says to State Rep. David Griffith, R-Jefferson City, thank you for supporting funding for Amtrak in Missouri. Nilon has taken the train many times and is grateful to know that twice-daily trips have resumed. (Photo by Julie Smith/News Tribune)