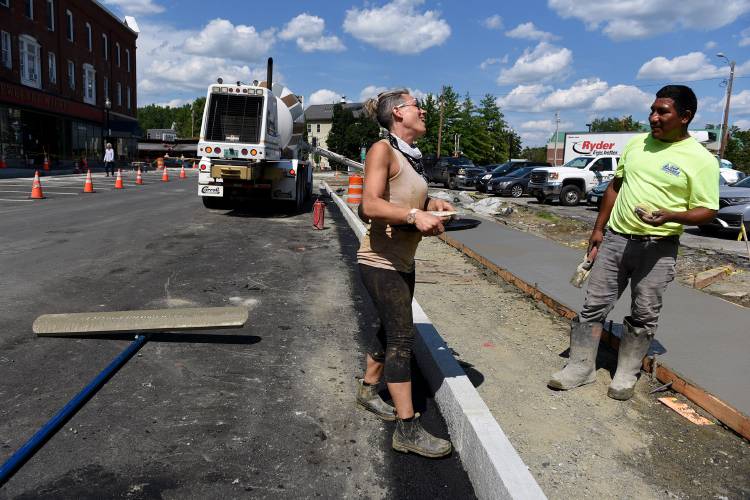 WHITE RIVER JUNCTION – Some businesses were given permission to reopen on Friday as cleaning and repairs continued at the 130-year-old Gates Briggs building following a water main break on Monday evening that left flooded the basement of the building with approximately 300,000 to 400,000 gallons of water.

Hartford Fire Marshal Tom Peltier said he approved the temporary occupancy allowing the building to reopen for business on Friday, after all conditions related to maintaining fire safety systems were restored to good working order. Operating.

The main water line supplying the sprinkler system was still under repair Friday afternoon, but the system is set up so that a pump truck can provide water, allowing occupants to reopen . There are no residential units in the building.

While some businesses have reopened in limited capacity, others are unlikely to be back for a week or more while they clean up. Kim Souza, owner of Revolution, has announced that his business will be closed until August 29.

Although her basement only had about 8 inches of water, less than other parts of the building, she said the silt left behind was still doing damage.

David Briggs, who manages the building for the family trust that owns it, said the cleanup will leave the building “as clean as new construction when complete”.

The line break that flooded the basement continued to cause problems on Friday, as an 8-foot-deep sinkhole measuring 3 to 4 feet in diameter opened up in the sidewalk along North Main Street near Tuckerbox.

City Manager Tracy Yarlott-Davis said the city is closing the sidewalk and parking spaces along that side of the street until an engineer can determine what repairs need to be made.

Until the lines can be fully repaired and the water supply is hooked up to the sprinkler system, the Tuckerbox and Piecemeal Pies restaurants will be limited to reduced occupancy, Yarlott-Davis said.

The upstairs Briggs Opera House is closed without power and has not been allowed to be occupied.

Briggs said the Opera House’s electrical panel was in the basement and crews wanted to inspect it more carefully before determining if it was safe. A small theatrical production has moved to the Coolidge Hotel, Briggs said.

Briggs said work is progressing, but it will be up to supply chain to determine how long the repair will take.

“Critical tasks are entirely dependent on supply lines for equipment,” Briggs said, adding that two key pieces of equipment are normally on the shelf, but he won’t know their availability until Monday.

Once the equipment is in hand, installation is a two-day job, Briggs said.

“It could be done by the end of next week, but it could also take a long time,” Briggs said.

The building is under fire watch, which requires building owners to have someone on site 24 hours a day.

Peltier said the building has been deemed structurally sound and all issues have been mitigated for temporary occupancy, but the building will be reassessed next week or sooner if conditions change.

“At this time, all systems and components have been inspected,” Peltier said.

He said the fire alarm system was working and the electrical system was safe.

The cause of the flooding was identified as a water main feeding the basement sprinkler system, which burst, filling the basement waist-deep in water before it could be cut .

On Friday, Yarlott-Davis said the city is still reviewing the incident, but said there was no indication that construction in the area had anything to do with the breach.

“We haven’t worked on this side of the building in over 40 days,” Yarlott-Davis said. “There was no indication of overpressure or anything of that nature.”

Briggs said he would wait to discuss those details.

“Experts and professionals are going to sort it out and look at the realities of it,” Briggs said. “We have it very, very well documented.”

Want to stay up to date with the latest business news? Sign up here to receive a weekly email on all of VTDigger’s reports on local businesses and economic trends. And check out our new Businesses section here.

Did you know that VTDigger is a non-profit organization?

Our journalism is made possible by donations from our members. If you appreciate what we do, please contribute and help keep this vital resource accessible to everyone.