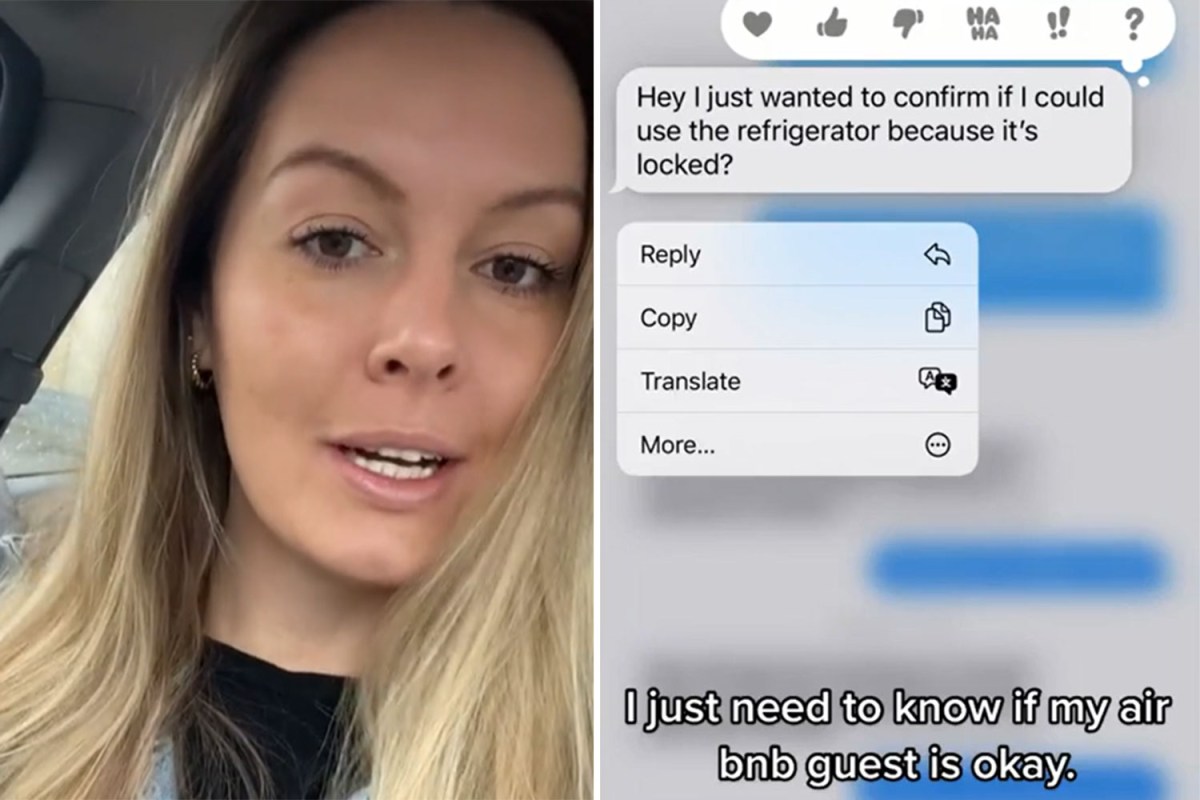 An Airbnb host has gone viral after sharing silly texts she received from a guest staying at her property.

Tiktok user Michelle posted a video revealing conversations she had with a guest, who appeared to be struggling with basic tasks.

It’s not uncommon for an Airbnb guest to contact their host with a question during their stay, but this woman needed help with just about everything she was doing in the apartment she was staying in in Ontario , in Canada.

Michelle, who uses the @theflowertruck handle, shared the video with the caption, “I just need to know if my Airbnb guest is okay.”

In the video, Michelle showed a screenshot of a text conversation between herself and the guest who didn’t know how to open the fridge.

The guest texted which read, “Hey, just wanted to confirm if I can use the fridge as it’s locked?”

Michelle replied, “There’s no lock on it. Maybe you’re trying to open it from the wrong side?”

Later, Michelle received another text from the guest who was having trouble turning on the hob.

The text read, “Hey, the gas won’t turn on. It turns on for two seconds and turns off. How can I fix this?”

Michelle asked, “What do you mean by gas?”, to which the guest replied, “The stove.”

Michelle said, “You should just turn the knob and leave it there. There’s no gas.”

The guest replied, “It goes red for two minutes and then goes out,” to which Michelle asked for a photo to figure out what was going on.

She received a photo showing that the hob was barely on and the dial obviously had to go higher.

Michelle replied, “So it looks like it’s only level three, so there wouldn’t be much heat. Turn it more so it’s closer to high level.”

Shortly after, Michelle received another text that read, “Hey Michelle, I had ordered some food and the delivery driver said he left it on the porch but I can’t find it. L ‘have you received ?”

Michelle then checked her security camera which showed the food on the porch – as the driver had said.

In the footage, the guest exited the property and looked down at the floor rather than the porch before returning empty-handed, to which Michelle commented, “Very thorough check of ‘the porch’.”

The video has been viewed 3.5 million times and viewers were shocked the woman had come this far in life.

One person wrote: ‘Really curious how this person managed to make the reservation in the first place.’

Another said: “Tried to get her ingredients, tried to cook, then decided to order delivery. None of three succeeded.”

Someone else wrote: “Your guest was definitely two kids in trench coats.”

A fourth said: ‘I feel like they were never taught how to grow up.

In other Airbnb news, a couple were shocked after checking into their ‘luxury hotel’ and found it wasn’t what they expected.

A man has been stunned after finding a ‘tropical’ Airbnb in Birmingham for £50 a night.

And a woman was left with a £5,000 bill after booking an Airbnb for her friend – who then ransacked it.