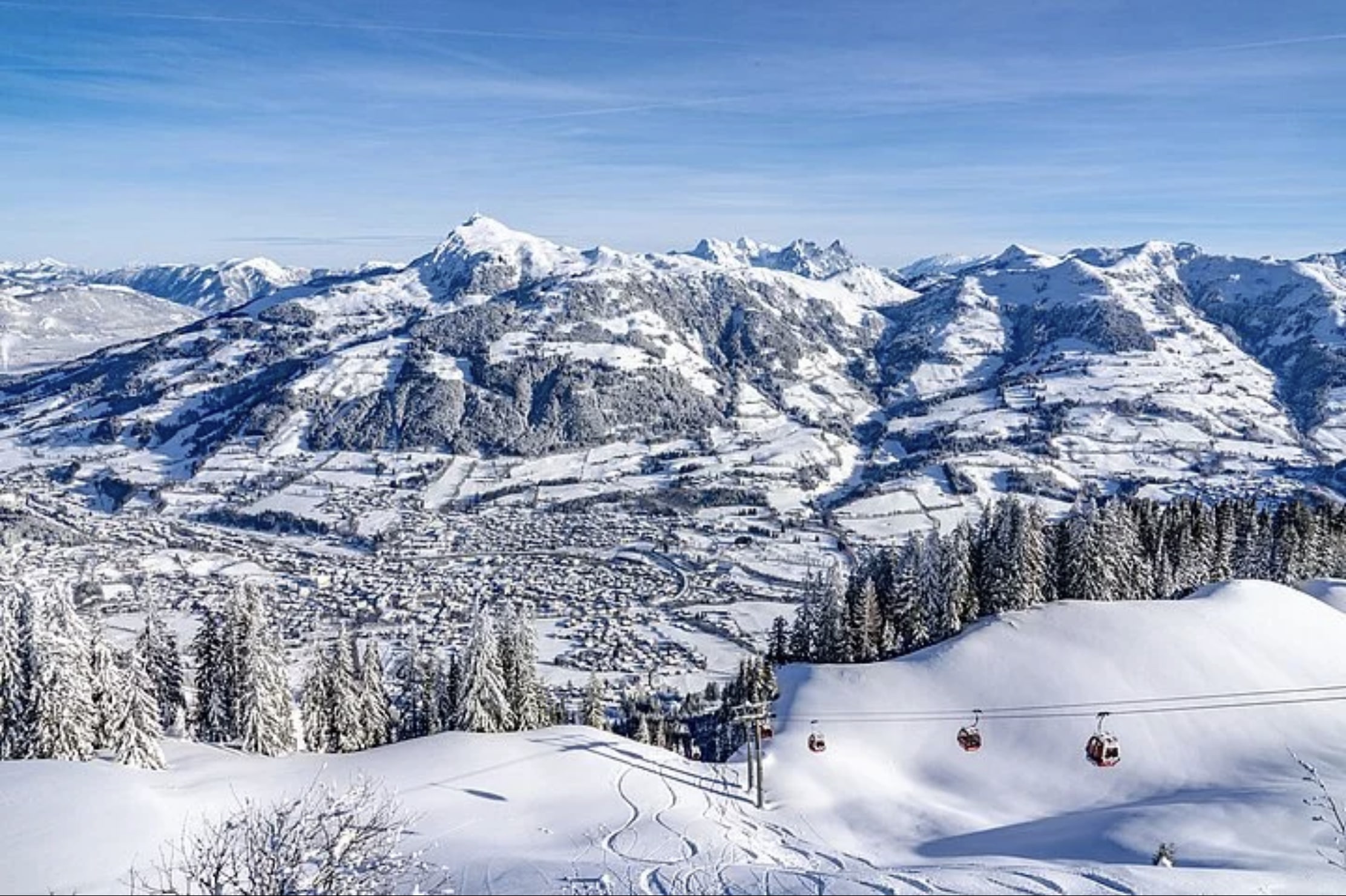 10 Reasons You Should Visit Kitzbühel, Austria This Season

Kitzbühel has been part of the Ikon Pass since 2021. Ikon Pass and Ikon Base Pass holders get seven or five day access to the Kitzbühel ski area respectively. Here are 10 reasons why you should visit Kitzbühel this season:

Kitzbühel is located just 90 minutes from Munich Airport. Several companies offer dedicated shuttle services from the airport to Austrian ski resorts, such as AlpstriaTaxi for only 249 USD (249 EUR) or you can rent your own car if you prefer flexibility and mobility. Salzburg and Innsbruck are also just 75 minutes away by car if you feel like exploring Austria. While in Kitzbühel you won’t need a car, but the resort offers free buses for skiers and cyclists.

The resort has one of the most modern ski lift infrastructures in the world. There are 57 state-of-the-art gondolas and lifts serving 145 miles of downhill runs, of which 119 miles are marked and groomed: 47 blue (66 miles), 32 red (41 miles) and 17 black (12 miles). The resort’s lifts are equipped with bubbles and heated seats and transport skiers and snowboarders at record speeds up the mountain, reducing queues even at peak times.

Every year, the resort hosts the famous Hahnenkamm racethe toughest alpine ski race in the world. Around 100,000 people come each year to watch the spectacle live and millions of people watch on TV as the world’s best alpine skiers race down one of the world’s steepest race tracks, the ‘Streif’. You can ski this run, which is open to the public most days, or catch this spectacular FIS World Cup event if you are there January 16-22, 2023. The Streif starts at an elevation of 5,463 feet (1,665 m) and travels 2 miles to the finish at 805 m. The steepest part, the “Mausefalle” (or mousetrap), has a slope of 40.4° and FIS athletes have been known to reach speeds in excess of 75 to 80 mph. Spectator tickets go on sale this month.

If you have an Ikon Pass, you get 5 days on the Base Pass and 7 days on the Full Pass. You must go to a ticket office in the station to collect your daily or multi-day ticket. For those who don’t have an Ikon Pass or want to ski longer, a day pass starts at just 51.50 USD (51.50 EUR) and if you buy 14 consecutive days, the price goes down to 30 USD per day. Season passes start at US$743 (until December 8, 2022). Unlike many US resorts, Austrian resorts don’t have exorbitant day pass prices, because there’s just too much competition in the European Alps.

The euro is the weakest in 19 years and is currently trading around parity with the US dollar. In other words, your money will go a long way and the prices are easy to compare. Also remember that advertised prices in Europe always include GST and tipping is not mandatory.

Austria is well known for being child-friendly. After all, a The Austrian founded the Kinderhotels chain. Kitzbühel has several child-friendly hotels with daycare and spa facilities and other amenities, such as the A Rosa Resorta 5-star resort hotel located in a castle, which offers family suites for 2 adults and 2 children from $800, breakfast and dinner included.

All lifts in the valley can be used for free, unlike some resorts where the lifts are only accessible with a ski instructor. Speaking of ski instructors, the Rote Teufel (“Red Devils”) ski school, the largest ski school in Kitzbühel, only charges $85 for a full day and the price drops to $60 per day if you book six consecutive days. When it comes to lift tickets, children under 6 ski free and children under 13 ski half price.

By far my favorite thing about skiing in Austria is that it’s perfectly acceptable to have all forms of dessert as a main course for lunch. I mean, what’s not to love about that? So win a few rounds and then treat yourself to a delicious apple strudel with custard sauce, Germknödel (a yeast dumpling filled with plums and served with poppy seeds and sprinkled icing sugar), Palatschinken (which is a stuffed pancake), Salzbuger Nockerln (a sweet soufflé), or Kaiserschmarrn (a pancake with raisins). The resort has more than 60 mountain huts and restaurants, so you will surely not go hungry.

The Austrians have perfected the art of après-ski. The scene in Kitzbühel is probably a little more refined than in St. Anton or Sölden, but no less fun. There are a few good bars down the piste, such as the Streifalm at the base of the famous Streif piste or the Sonnenalm next to the Hartkaser chairlift. There are many more water points in town. Probably the most famous place is “The Londoner” with live music and a party atmosphere every night.

Kitzbühel is home to several winter sports fashion brands, including the exclusive Sportalm and Frauenschuh brands. Sportalm was founded in 1953 by Willi Kruetschnigg and over the years has grown into a multinational company with a turnover of 60 million dollars. In addition to ski wear, they also sell traditional Austrian clothing (think Dirndls) and other sportswear.

Frauenschuh was founded in 1950 as a leather manufacturer. The founder’s son, Kaspar Frauenschuh, turned the company into fashion retail in the 1990s to design his own clothing line. Both companies still have their flagship stores in Kitzbühel. Take the opportunity to shop for amazing quality ski wear that you won’t easily find anywhere else.

10. Something for every budget:

While Kitzbühel is probably the most glamorous ski village in the Austrian Alps, lined with chic boutiques and luxury hotels, you can stay for much less in Kirchberg, on the other side of the mountain range, with exactly the same access to the ski lifts but a more cozy atmosphere. You can find decent 4 star hotels here for as little as $150 and still be in the same ski area.